Double Trouble: Having Twins in Our 40s

When R&F got married in their mid-40s, they knew that becoming parents wasn’t going to be easy. After eight IUIs, seven IVFs, and two miscarriages, it was clear that they would have to try a different route. By then, they were both in their mid-40s, and R’s hormone treatment was beginning to wreak havoc on her health.

Adoption seemed to be their only hope of becoming a mom and dad, but they knew it would be a lengthy process. It was then that a caseworker at their infertility clinic suggested they call Family Source Consultants.

The moment she spoke to Staci, R knew they’d found the right place. “Right from the start, it was all go,” she says. “Staci set me up with a login, and I was able to start looking at possible egg donors.”

R soon got busy with checking out potential donors, and suddenly, their journey was in action. Although her first choice of donor turned out to be unavailable, FSC arranged for her second choice to go ahead within just 36 hours.

J turned out to be the surrogate of their dreams.  “We just really clicked with her. We had so much in common,” says R.

Already, it seemed that the stars were aligning. J’s tests were arranged for Father’s Day weekend, and the embryo transfer date was set for the weekend of Rosh Hashanah – an important Jewish holiday.

Then, four days before our surrogate’s pregnancy was confirmed, R’s father called with bad news. R’s mother had just undergone surgery for ovarian cancer. “My dad was devastated,” R says. “So I said, ‘Would it make you feel better if you knew that in four days you might be finding that you’re a grandparent?’ Oh my god, did that perk him up! It really cheered my mum up, too.”

But the real surprise was still to come.

R was out shopping one afternoon when she got a text message from J. It was a photo of an ultrasound followed by the words, “It’s twins!” Somehow, R was able to finish her shopping that day and call her parents. “My Dad said he was too busy to talk, so I just yelled into the phone, ‘Dad, we’re expecting twins!'”

As it turned out, her dad was at the hospital with her mom, and the whole hospital room heard the news.

Although they knew there was a chance of twins using an egg donor and a surrogate, it seemed too good to be true.

The news was especially joyful for her mom, who was struggling to recover from her surgery at the time. She was even happier when R&F found out both babies would be girls. “My mom was over the moon because she’d raised three daughters herself. She was so excited!”

After despairing for so long, R&F were now able to simply look forward to becoming parents. Although they knew their lives were about to change dramatically, R says there was also an incredible sense of calm. “For four years, we’d been so stressed with trying to get pregnant and so sad every time it didn’t work. We were always waiting for results from different procedures,” she says.

“Once we became pregnant, everything else dropped off the radar. I remember thinking, oh wait, she’s pregnant – I don’t have to make any phone calls today!” says F.

J kept them updated throughout the pregnancy, sending photos of her ultrasounds as her belly grew.

After an amniocentesis confirmed that everything was fine, R&F began to share their news with friends and family. Their 20-year-old niece was incredibly excited to learn that she would no longer be the only girl amongst the cousins!

The twins were born three weeks early, and it turned out to be another special date: the day after R’s mom’s birthday. As Intended Parents, R&F were able to stay in a suite in the hospital designated for surrogacy clients. The nurses taught them how to feed, diaper, and change their babies.

Bringing home two babies at once would be a huge shock for any first-time parents. But as stressful as it was, R says they’ve never known any different.

The best advice she had came from her pediatrician, who told them to get both babies on the same schedule from the start. “If one baby woke up, we’d feed her, burp her, change her diaper, then we’d wake up the other and do the same. Otherwise, we’d have been feeding, burping, and diapering around the clock,” R says.

Having a night nanny in addition to their regular nanny for the first three months also helped tremendously. 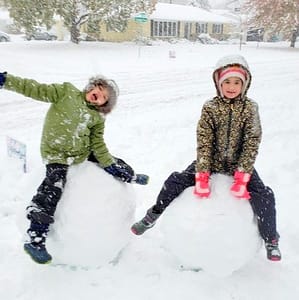 The twins are now eight years old. One twin is identical to her father, while the other is a ‘little clone’ of R.

Sadly, R’s mom died when the twins were seven-and-a-half months old. Her best friend later told R that the babies were the reason she had held on so long. “I’m happy she got to know her grandkids. She loved being a grandma,” R says.

R&F have maintained a close relationship with J and her husband R over the years, which has been an enormous component of their journey. They share photos of their respective families regularly and even had a Zoom meeting for the girls’ eighth birthday. R says this is crucial for any Intended Parents. “When you meet your surrogate, you want to make sure it feels right,” she says. “You want to be able to talk to her about anything. With J&R, it just clicked. We were similar people and they’d gone through a lot of the same things in their lives.”

Looking back, she also advises other IPs to accept help where possible. “It’s nice to have people around who want to step in and help you. If people offer, then go for it. It can get overwhelming and stressful,” she says.