We’ve heard about how women start to develop ‘baby fever’ at a certain age. They stare longingly at other people’s newborns, or daydream about what color they’ll decorate the nursery ‘when the time comes’. Lots of little girls enjoy playing ‘mom’ to a doll (or ten) and thinking up all dozens of different names for her own children.

In fact, when we hear someone talking about how much they long to be a parent, we almost always assume that person is a woman. Women, after all, are the ones with the ‘maternal instinct’ right? They’re the caregivers, the nurses, the baby-carriers, the bearers of all the estrogen.

But this is the 21st century – and the paternal instinct is finally being recognized.

Men of today – and probably since the beginning of time – want to be parents, too. Like many women, many men also dream of the day they’ll chase their little one around the playground, or play the airplane game at dinnertime, or go fishing (and shopping!) on the weekend.

But, what if that guy is single? Or gay? Paternal instinct or not, isn’t he missing some vital ingredients in the baby-making process? Should he instead fight his way through a lengthy adoption process (if he’s even accepted) or simply settle for being the cool-but-childless uncle?

Good news – he doesn’t have to choose either of those.

Who can be a parent?

We could probably all think of a single guy we know would make a great dad – if only he could meet someone. By ‘someone’, we mean a woman.

In fact, there are plenty of loving and caring guys out there who knows they’d make great dads – but aren’t ever going to meet that ‘someone’. This could be because they’re quite happy to remain single, or because they’re gay.

Sure, men’s and women’s roles are no longer as black-and-white as they used to be (hurrah!), but society still tends to associate ‘baby fever’ with women.

Today, any man can be a dad – whether he’s single, gay, trans, or otherwise infertile. What’s more, the number of single men now becoming solo fathers is growing steadily. 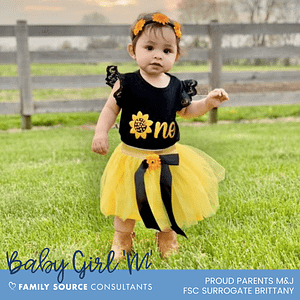 ‘M&J’ share, “Fatherhood has been our greatest joy together. We enjoyed every milestone that baby ‘M’ had. We had a great experience with FSC, they were there for us since the beginning of our journey. They are great to work with!”

Proud fathers ‘M&J’ are now in the process of building another precious MIRACLE to add to their family. We are wishing them all the baby dust, in hopes that baby girl ‘M’ will soon become a big sister!

How single and gay men can become dads

Technology is a wonderful thing. Well beyond the realm of smartphones and robots and virtual reality, technology has made it possible for anyone to become a parent.

Single men – whether heterosexual or gay – are now able to have their own biological children through assisted reproductive technology.

Gestational surrogacy is fast becoming a popular option for men to start or build their own families. Family Source Consultants has already assisted a number of men on their journey to becoming a dad – and that number continues to rise.

Yes, adoption is a possibility, but it’s a tricky one. Adoption agencies have different policies for dealing with single applicants, and some won’t accept them at all. Then there’s the fact that an adopted child is not (in most cases) genetically related to his or her adoptive parent. Which, let’s face it – is often the one thing that most intended parent(s) desires.

Becoming a dad through gestational surrogacy is a long road; one that can have a few bumps along the way. But, as any dad would agree, every bump and milestone will be absolutely worth it.

The journey begins by submitting an application (and a comprehensive questionnaire) to Family Source Consultants. Although surrogacy laws vary between states, FSC has all the know-how regarding which surrogate-friendly states, and where an available surrogate will be located. They also take care of all the legal matters involved in the process.

After meeting with a consultant, the intended father will be taken through the ins and outs of selecting an egg donor and a surrogate mother. The matching process is customized to suit the specific needs of every prospective parent, donor, and surrogate. A meeting is arranged between a hopeful dad and a potential surrogate and, if both parties are happy, the journey begins.

The waiting game can be tough, but it can also be a lot of fun. The intended father and his chosen surrogate mom can decide how close they want to be throughout the pregnancy. While every case is different, many prospective dads also have the opportunity to be fully involved in the pregnancy and birth experience.

And then – nine months later (well, generally speaking!) – there will be one more happy dad looking forward to Father’s Day.

Ready to become a Father?

There’s nothing quite like being a parent. If you’ve spent your life dreaming of bringing a “mini you” into the world, then don’t let anything stop you! There are ways to make it happen. Thousands of dads around the world are already discovering the joys of parenting through surrogacy – some several times over.

Give Family Source Consultants a call and have a chat about your options. Who knows – the next Father’s Day (or, at least, the one after!) could be your very first.