A Helping Heart: Renae’s Journey as an Egg Donor and Surrogate

Renae is a former Family Source surrogate and three-time egg donor. She always felt a strong desire to help someone build their family, so egg donation and surrogacy were a fantastic fit for her. After completing 3 open egg donations, Renae decided to step into the role of surrogate and was matched with a single intended father from Spain. She shares that even though the journey was different than she anticipated, she couldn’t be happier with her choice to become a surrogate!

Why did you first become an egg donor?

I really always wanted to help someone have children. I had a daughter of my own when I first became an egg donor. I couldn’t imagine not having children, so I just wanted to help if I could.

That was what prompted me to do the first one. I did three total. It was, it was a fairly easy process. It was great to meet the people that I was helping and it was just a really great experience.

Were all three open egg donations?

If I remember correctly, yes.

Tell us about your surrogacy journey.

Surrogacy was a little bit different. After I was an egg donor, I had that feeling that I wanted to do something more, but it was almost more than that.

I went through a divorce. I have two kids and I just really felt this strong sense of “I don’t know where I would be without my children.” It was so much stronger after that.  I really wanted to do whatever I could to help someone else have a family. That’s where it stemmed from and blossomed.

I couldn’t be happier with the choice that I made and the family that I matched with. The dad was just amazing. I got to meet his family. They are from overseas, so the language barrier was a little bit of a struggle, but we really worked through that and didn’t have too much difficulty.

It was just an overwhelming feeling of wanting to help. And seeing the look on his face, just all throughout the journey, like everything was so exciting to him and it just made it all so, so amazing. 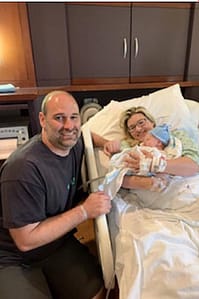 You said your IP is from overseas. How did Family Source help you navigate the language barrier as well as the distance?

FSC actually has an interpreter. I needed Spanish, so she was amazing. She helped him. His sister spoke English pretty well, so if she was involved, we could kind of do it between ourselves.

But far as the contracts and that kind of thing, the interpreter was amazingly helpful to both of us, but especially him. He said more than once how she just made him feel so uncomfortable and it was so much easier. 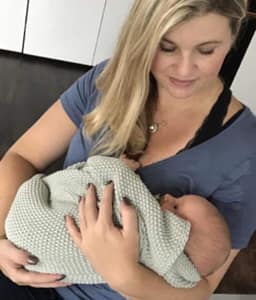 Since your intended parents were overseas, when did they come in for the birth, and was that difficult for them to be able to fly over?

We did this pre-COVID, so it was a little bit less challenging. They came in a week before, because they knew that getting the birth certificate was going to be a little bit of a process.

So they planned on staying about a month afterward. I think in total, they came in maybe a week and a half before the birth. I was a planned C-section, so it was a little bit easier for them. Then I believe that I think they stayed a month after.

How did the C-section go? Is that because you had C-sections before? Is that why it was planned?

Yes. My daughter and my son were both C-sections, so this was kind of a no-brainer. my doctor said, “I think this is the way to go.” I agreed with her. And it went pretty well. Obviously, it’s a C-section so it’s still a little bit difficult.

I wish that I could have had both two people in the room. That was kind of the only thing that I really struggled with. I wanted my support person just in case something went wrong. Nothing went wrong, but they had to get my spinal a little bit higher up because I have an extra curvature in my back, so I did kind of feel like I w I was panicking. I felt like I couldn’t breathe, so I was happy that I had my support person.

I wish that the hospital policy would have allowed me to have two, but I completely understood that was the rule.

But that was probably the only thing that bummed me out a little. 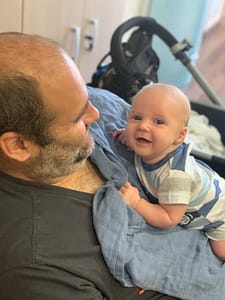 When you decided to do surrogacy, how did your family and your children take it?

There was my select little circle that knew before I ever did the transfer. When I was in the beginning phases of the process, they knew what I was doing. They were all on board, super supportive.

I waited to tell my kids until I was about six months along. There was a reason why I waited, and I feel like it was a good decision. I feel like everything went smoothly after that, but I just told people along the way. Then when it was very obvious, I made an actual public announcement.

We all know in surrogacy, even egg donation, that money is usually not the priority and why we do it. We do it because we want to help someone else, but we do get compensation as surrogates. So, how did that compensation help you and your family?

Tremendously. Like I said, prior to this, I had been divorced. I was kind of just rebuilding my life at the time. It allowed me to take my kids to Disney World. I bought a house. I traded in my car that was getting a little bit older.

It allowed me to do quite a few things that I probably would not have been able to do or would have taken me a lot longer to do those things. It just gave me a sense of comfort.

It was really an amazing mixture because I was helping somebody, so I felt good about how I was getting the money. It was just a good feeling all the way around. I was doing things for my family and I could not have asked for a better opportunity.

What advice would you give to a first-time surrogate?

My biggest piece of advice is definitely to trust the process.

You can read about it. You can research it. You can get all your questions answered. But until you’re in it, there are things that are going to come up that you maybe didn’t expect.

Just trust the process and trust that the outcome is going to be as amazing as you imagined it to be. Don’t get hung up on little hiccups along the way. Because I promise at the end, you’re not even going to remember those things.

You might have a vision of how things were going to go and then things change a little bit. Sometimes that’s for the better! So don’t, don’t worry too much about it.

Did you have any preconceived notions before you got into it?

I don’t know that it was a preconceived notion, but I thought things would go faster. Even though everyone does tell you that it’s a hurry up and wait, you think mine’s going to go smoother and faster. Then you get into it and you’re like, oh man, here’s what they were talking about!

You just have to be patient and know that ending is so worth any wait that you have. It goes the way it’s supposed to go.

Did you have any hiccups along the way?

Yes. I actually had to have a colposcopy before. I can’t remember exactly what happened, but I had a growth or something that they needed to biopsy. They didn’t pick up on it until I actually went for my physical exam. So I had to go in and have that done. Then everything was fine. It just delayed us for maybe two or three months. I didn’t expect that at all. It was never anything that I had heard about in the past.

It was kind of a surprise. And honestly, for a minute I thought that that might be the end because he could have gone with someone else and bypassed that waiting period. But he chose to hang with me, And it went smoothly after that. That was probably my only little hiccup.

The end got us exactly the outcome that we were both hoping for!