One in a Million — or Should We Say Two?

After four miscarriages in four years, intended parents R and B were beginning to wonder if they would ever be able to grow their little family. They already had two children, and had naturally assumed another little brother or sister would come along soon.

But as the years ticked by, it became clear that things weren’t going to be that simple.

“I’ve had every test under the sun and the doctors couldn’t figure out what was wrong,” said R.

Like many other couples, R and B were struggling with secondary infertility: the inability to conceive or carry a pregnancy following the delivery of a child.

Secondary infertility makes up around half of all infertility cases, which makes it even more common than primary infertility. Age can be a factor, particularly for women who have waited a little later to start a family. Often, however, the cause remains a mystery.

For R and B, the frustration continued. After yet another miscarriage, and still no clue as to what was wrong, their doctor suggested they turn to surrogacy.

After speaking with Staci Swiderski, the CEO and Founder of Family Source Consultants, R and B knew they had come to the right place.

FSC assigned them with a Matching Specialist, and their journey began.

The couple then met Holly, their gestational surrogate-to-be, through a video meeting.

“It was amazing!” said R. “It was worth every penny. Ronda was assigned to my case and she took care of everything. It really made the whole process go very smoothly and I am grateful for that.”

Holly says that she and her husband knew right away that R and B were ‘the ones’ she was meant to carry a child for.

“We absolutely love R and B. Our relationship with them has always been so comfortable, like talking to family,” says Holly.

From there, FSC arranged for the embryo transfer. Then, something surprising happened: R discovered she was pregnant.

However, the couple knew better than to hope for too much. Having been through multiple disappointments already, they decided to go ahead with the embryo transfer.

“My issue was always miscarriages – I had no problems actually getting pregnant,” says R. “I assumed this pregnancy would end in much the same way, so we decided to move forward with the second transfer.”

But the miracle really was to be. In a wonderful twist of fate, both pregnancies progressed without any problems. Suddenly R&B found themselves decorating the nursery for not one but two bundles of joy. 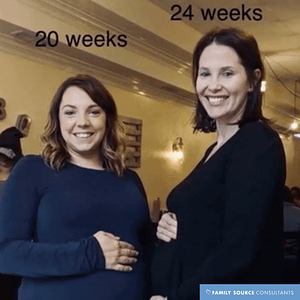 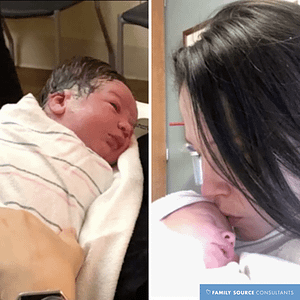 Despite arriving in the midst of a global pandemic, both births went smoothly. The two little girls are now at home with their big brother and sister and doing well.

R and B can still hardly believe their blessing.

“Things have been difficult with COVID-19, but otherwise everything is just great! Our older kids are over the moon about their two baby sisters and it’s a very nice feeling knowing our family is complete.”

Although their journey was a little unexpected, R says she wouldn’t hesitate to recommend surrogacy to other couples experiencing infertility.

“I would say to first make sure you do all your research and speak to many different people about surrogacy to get different perspectives. Second, don’t limit yourself too much in terms of what you want from a surrogate. I was dead set on having someone with surrogate friendly insurance and thereby limiting myself to who I was being matched with. If I didn’t relax that requirement, I would have never met Holly!”

Their journey has been just as special for Holly, with whom they now have a great relationship.

Holly had been a stay-at-home mom for seven years when she felt the need to “do something more”. She learned about surrogacy through a friend who was a gestational surrogate for Family Source Consultants, and began to wonder if it was something she could do, too.

Then, in church one day, she had an epiphany. “The pastor said, ‘If you had the opportunity to change someone’s life in a profound way, would you?’”, Holly said. “It resonated with me. I had been talking to my husband on and off about becoming a surrogate for a few months, but after that sermon I knew that’s what I was meant to do. I put in an application that night and the rest is history!”

Both families are now in close contact via the internet and share regular updates on the wee girls. They’re now looking forward to meeting up in person as soon as the current lockdown restrictions are lifted.

Holly says the experience has confirmed that she made the right decision to become a gestational surrogate. She has some sound advice for other women who might be considering becoming a surrogate themselves.

“Every experience and journey is different, so be picky with who you match with. Also, don’t expect your journey to go exactly as planned – there will be lots of ‘hurry up’ and wait, tears – both sad and happy – and emotional ups and downs. But when it’s right, you will know!”

Family Source Consultants was founded on Bringing Dreams and Miracles Together, and more than thirteen years later – our vision still remains the same. We continue to build families with an approach that is compassionate, empathetic, and individualized.

To learn more about proud parents ‘R and B’ and gestational surrogate, Holly, watch their beautiful journey unfold via YouTube video.