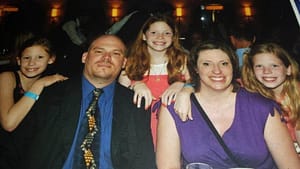 My name is Laurie Thompson, I am a mother of 3 girls (Avery, Kyrra and Lacey) and have been married for 18 years to my wonderful husband Damion. My surrogacy story begins when I was 18 years old. I had a friend who was told at 13, she would not be able to have children. I decided at that moment that I would be a surrogate for her, once I turned 18. Let’s just say that life happened, and I met my husband, moved to Texas, and got married. My friend decided that she was going to try IVF to see if the miracles of medical technology would work for her. She was pleasantly surprised to find out that she was indeed pregnant with TWINS. I, too, found out that I was pregnant a few months later (after I had experienced infertility for 5 years, and suffered 1 miscarriage). Our babies were born 3 months apart .

I had my 3 kids in 37 months and when my youngest was 3, I decided I wanted to be pregnant again, but didn’t want any more kids of my own. That was when we decided to look into Surrogacy. I had emailed Zara in 2009 regarding information on Surrogacy, and within days, Zara contacted me and asked when I was going to fill out the application, as there were several couples interested in me. I filled out the application and created my profile and was matched almost immediately.

My first journey, my IP’s were from Serbia.  They had been trying to conceive for 20 years, and unfortunately, it was unsuccessful. I am glad to say that after 1 transfer with 2 embryos, their little girl was on the way. Their gorgeous daughter will be 5 in May 2015, and I could not be more delighted for them, and their little family, I helped create.

Six weeks after my first delivery, I called FSC and told Zara I was ready again. She immediately sent me new profiles, I again was matched up immediately, this time with a same sex couple from Spain. We a had 1 transfer (3 embryos this time) and 10 days later, I find out that they were pregnant. A couple of weeks after, I found out it was TWINS. I delivered at 38 weeks, 2 healthy (and large, for twins) girls.These two beautiful babies will be 4 in September.

My third journey, unfortunately was not as successful. I was again matched up with a same sex couple from Spain. We did 4 transfers and got pregnant 3 times, but miscarried all 3 times. I could not break the heart of the IP’s again, so we decided to part ways.

June 2014, I had a transfer for my fourth journey (1 embryo this time).  My IP’s were a same sex couple from Spain again, and was glad to report that 10 days later, they were pregnant, with a BOY. If you are keeping track, I have delivered 6 GIRLS, 0 BOYS up to this point. February 2015, I gave birth to my fourth and final surro baby.

I have devoted the last 7 years of my life to helping create families through surrogacy, and will be forever grateful to the FSC Family, for making this so easy on me and my family. While it is bittersweet to not be a gestational surrogate in the future, I am honored to say that I helped put Surrogacy on the map, and have helped people believe that there is hope.They too will have their dreams of waiting a family come true.