Surrogate Alisha delivered a baby girl in August of 2018 for her Intended Parents. She took the time to share some of her insights into the process, and we are excited to share with you here.

“I’ve been grateful for the support and encouragement I’ve received from all the staff at Family Source Consultants. I’ve also benefited a lot from the support of the other surrogates through the Facebook group – especially because I’m further away geographically and not able to attend support groups in person. They’ve been a great resource for questions I had along the way.”

What led you to become a Surrogate?

I have had so many friends go through fertility treatments and loss. Even before I had my own children, I told my husband that if pregnancy was easy for me, I would like to carry a child for someone else.

Who was your largest support person/s throughout your journey?

My husband, though reluctant at the beginning, knew surrogacy was something I was passionate about and he ended up being my biggest supporter. Also, my mom and brother really encouraged me throughout my whole journey.

What made you decide to choose your Intended Parents?

When we read the profile of our Intended Parents, we learned that they had gone through years and years of loss, including four failed IVFs as well as losing twins at 22 weeks through another surrogate. My heart went out for them and I ultimately became their surrogate.

What are some of the highlights of your journey?

One of the highlights was meeting my Intended Parents via Skype. This made the process so much more real for my husband and me. We loved receiving excited responses from them via WhatsApp when I shared my growing belly pics and first video of baby kicking.

However, the biggest highlight was seeing the tears of joy in the Intended Mom’s eyes when she held her daughter for the first time. It was transformative hearing my own young kids totally “get it” when they saw the Intended Mother holding her daughter – this little miracle that grew in their mommy’s belly.

Do you have advice for women who are interested in becoming a gestational surrogate?

Go with your gut when choosing your Intended Parents.

Why did you chose FSC?

Another friend was going to be a surrogate – we were going to carry “twins” together for another couple. She didn’t end up continuing as a surrogate, but I already felt invested in Family Source Consultants and I was thankful for their support!

What is the one thing about your journey that has most surprised you so far?

How quickly my body has bounced back after delivery! Also the tenderness that most others have when they learn that I was a surrogate.

How is being a Surrogate different than your own pregnancy(ies)?

Emotionally you aren’t preparing for adding a newborn into your life/family. Your energy is really focused on your pregnancy and your own family, instead of the mental energy of prepping, nesting, buying things for the little addition.

My energy level was so much higher being pregnant as a surrogate than during my own pregnancies. 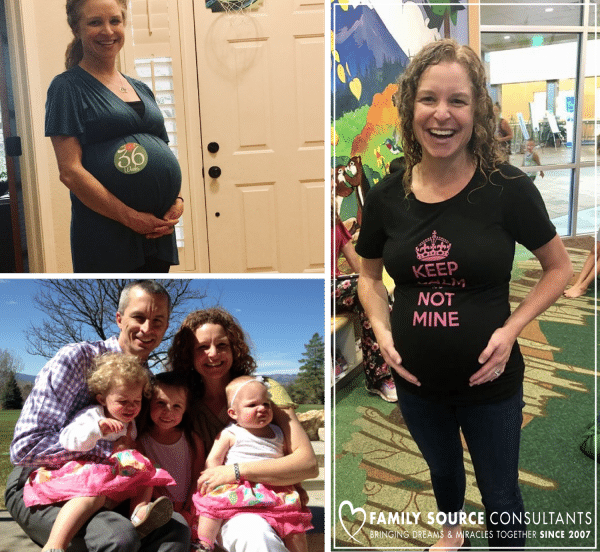