Why I am Proud to Be a Surrogate: Danyelle’s Surrogacy Story

As a young mother, Danyelle was determined to prove that she could overcome any obstacles in her way. After her third child was born, she pondered the possibility of becoming a surrogate and submitted an application with Family Source Consultants. With all the criteria met, Danyelle was matched with a couple who truly fit as the perfect example of who she had hoped to carry for. She shared with us her motivations for becoming a surrogate.

“You might wonder if these women are doing this solely for money or because they have some freakish desire to constantly be pregnant. There is a great sense of pride and accomplishment knowing that we played a role in making a family feel complete and that is always the number one motivating factor to being a surrogate.” – TeamFSC Surrogate Danyelle

Sometimes I think back to the way I played as a little girl. Toys like baby dolls and strollers were always appealing to me. I liked to give the dolls names, change their clothes, and give them baths. I guess that’s how I started to know I wanted kids when I was older. Eventually, I graduated from dolls to helping with my younger siblings, but some innate desire to parent was always in me. I found myself pregnant young and took on the role of motherhood a bit sooner than I had imagined for myself. But, even at nineteen, I was determined to do it just as well as the women older than me. I took pride in knowing I was doing everything I could to care for the baby I created. I wanted to make sure no one could ever label me as a “bad mom”. When I first heard of surrogacy, I thought it was just some weird thing that women did for movie stars or models; an option exclusively for the wealthy who didn’t want to destroy their own bodies by having kids, so paid others to do it for them. I would occasionally stumble across an article on the internet related to surrogacy and never thought more about it until I had my second child. I started thinking to myself, “Hey, maybe my body is good at this and I can become a surrogate.” Admittedly, I was also interested in earning some extra money as a solution to my financial worries. When I mentioned it to my then-boyfriend he scoffed at the idea and made me feel like I was ridiculous. I can’t remember the exact words he said but the face he made was pure disgust as if me being pregnant would be far too inconvenient for him. I knew one of the requirements was having a partner that was on board, so I pushed the thought aside. A few months later I got pregnant with my third child, and I was completely shocked, but also ashamed. How could it be that a person like me, who was in a bad relationship and never married, could keep getting pregnant while others try and try for years and never get to experience parenthood? It felt extremely unjust. Not to mention the insecurity I had regarding whether I could provide for the two kids I already had. I felt overwhelmed and like I was taking something that I didn’t deserve to have. People at work would occasionally make lighthearted jokes about my back-to-back pregnancies. I guess the idea of one day being a surrogate stuck with me because I would joke back that I was “done having kids after this…but I’d maybe consider getting paid to do it for someone else.” I ended up moving back in with my parents before my third child was born, in hopes of saving for a better home. A few months after that, I ended my relationship with my kids’ dad for good. I was sick of being ashamed of the position I was in, with him refusing to accept the same level of responsibility for the family we created as I had. I couldn’t take that life with him anymore. One of the first things that I did as a single woman was filling out my surrogacy application. I knew I met the criteria now that he was out of the picture, and nothing says “not trying to date” like being pregnant. The fact that I was living with my mom gave me enough financial stability, so I figured why not go for it? Everything in my life was lining up perfectly for me to fulfill my desire to grow a baby for someone. It might sound wrong to some people that my becoming a surrogate had something to do with ending a 12-year relationship, but it was a very grand emotional event for me that was more about maturing as a person than doing something I knew he didn’t agree with. The negative feelings I had surrounding my own pregnancies melted away when I made the choice to get pregnant, on purpose, for the first time. I wanted to match with a heterosexual couple because I felt I needed to do this for another woman. I had developed this deep empathy for anyone who wanted children but couldn’t because I knew they deserved what I had. 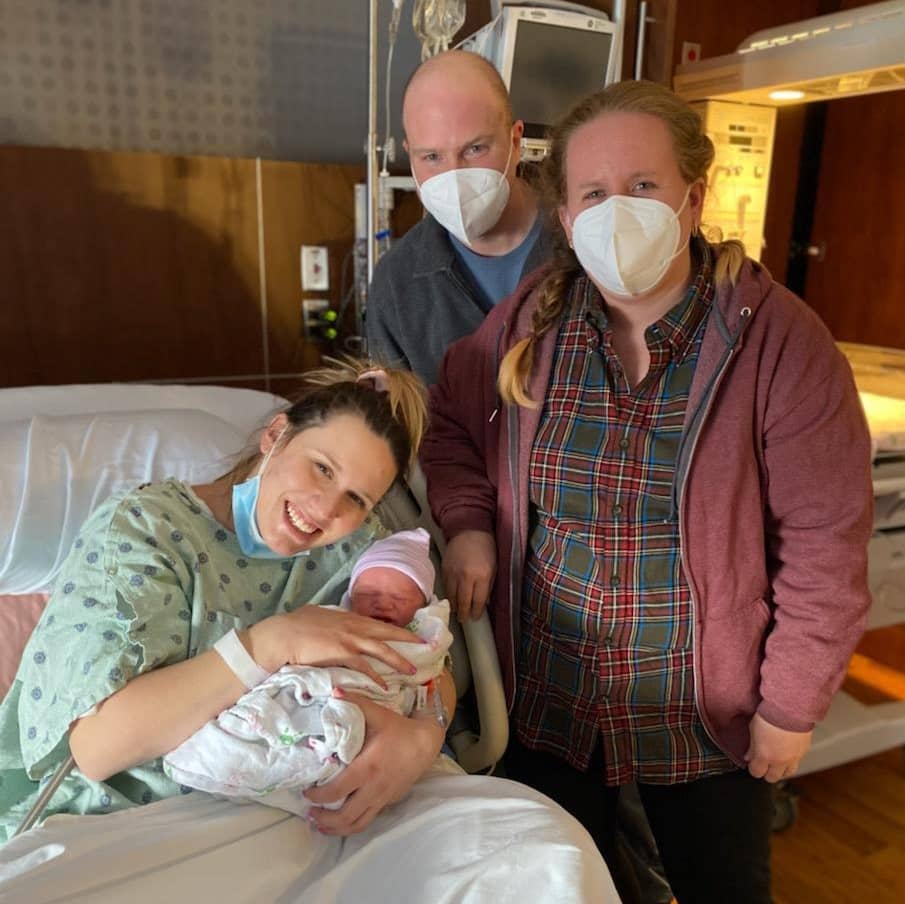 In the childbearing department, I felt like my Intended Mother was my opposite. She had all the things I was insecure about not having; her own home, a loving husband who would make a great dad, and enough financial security to be capable of funding a surrogacy journey. She should get to bring home a baby too. It was a trade-off in my mind. Like meeting at a crossroads to give each other what the other lacked. I was giving them the missing piece to their happy family and taking the compensation to give my own children better lives. I was bringing balance to the unfairness in the world. In the end, it wasn’t the compensation that made the journey worth it. I gained an overwhelming sense of pride in myself for how much I was able to give with my own body.

These days, my own little girl is the one playing baby dolls, while I busy myself with the tiresome tasks that are actual parenthood. But, in the back of my mind, I get to feel joy knowing that somewhere nearby another woman is also getting no sleep, washing tiny clothes, and changing diapers. She gets to fulfill her own innate desires to nurture and be a mother all because of a choice I made to become a surrogate. And I will never regret it.

If you can relate to Danyelle’s story and are considering becoming a surrogate, we’d love to talk to you! Apply online or contact us for more information!